Story by Lily O’Neill for BusinessDen

Mark Shaker wants to add his food hall touch to the new downtown being developed in Westminster.

The Denver developer and restaurateur plans to open a new 12,000-square-foot food hall next year at 5850 W. Central Ave., on the ground floor of a 226-unit apartment building currently under construction.

“I’m really interested in the periphery of the Denver metro region. I’ve already opened two in Golden and Aurora,” Shaker said. “Westminster’s downtown transformation is really exciting, and I’ve been talking with the city for years about joining. So, when I saw other great operators, like Tattered Cover and Tap & Burger, I knew it would be a great opportunity.”

Shaker is the co-founder of Aurora’s Stanley Marketplace, Denver’s Broadway Market and the recently debuted Golden Mill in Golden.

His new Westminster five-stall food hall will be called Westminster Alley and feature a street art theme with various murals throughout. Although he hasn’t chosen vendors yet, he said it will be a mix of ethnic and comfort food, similar to Golden Mill’s options.

“We want to catch people off guard when they walk in there,” Shaker said. “It’s going to feel like a bunch of New York City alleys, and the idea is something you wouldn’t expect in the heart of Westminster.”

The restaurateur signed a lease for the space on the bottom of the Aspire apartment building last month. He’s hired Handprint Architecture, which also worked on Golden Mill, to design the space and Minneapolis-based developer Sherman Associates to complete the build out, which will begin in August. Shaker said he hopes to open Westminster Alley by May 2022.

Westminster’s new downtown is being developed on approximately 105 acres that used to be home to the Westminster Mall. The city finished purchasing the blighted property in 2011, and proceeded to tear it down and plan out the neighborhood. 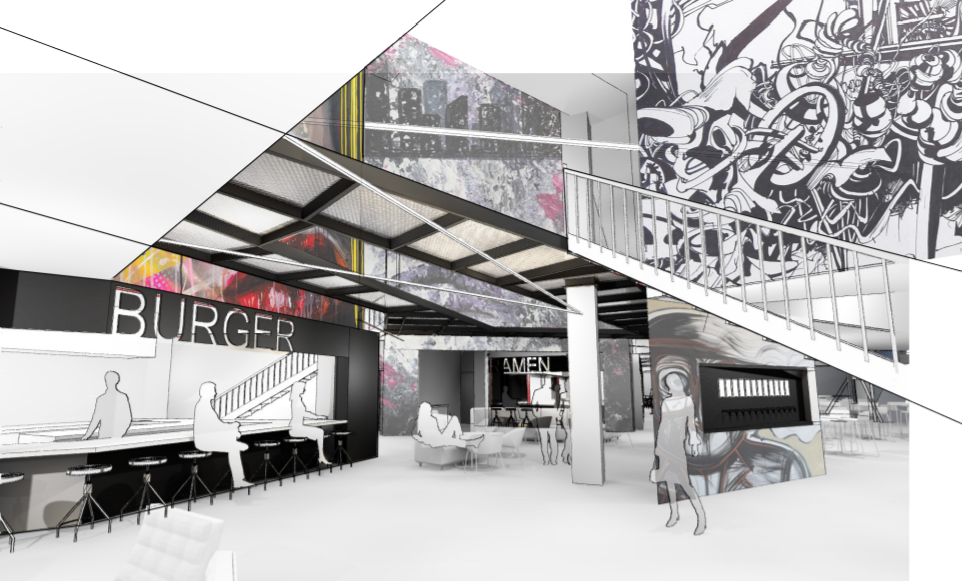 Westminster Alley will be reminiscent of New York City alleys with graffiti murals throughout.

Completed so far is an Alamo Drafthouse, a 125-room Origin Hotel that will house a new Tattered Cover bookstore and two apartment complexes.

Tap & Burger, owned by Juan Padro of Culinary Creative restaurant group, also plans to open a new 4,000-square-foot location at 8810 Westminster Blvd., down the block from the Origin Hotel, later this year.

“We thought of Golden as a great town that was a little underserved, and we would say the same about Westminster,” Shaker said. “Meeting with their officials and seeing their vision for the next 15 years has been a compelling narrative, and we want to be a great gathering spot for this municipality’s new dynamic.”

In addition to his new project, Shaker is getting ready to open two food stalls at the end of June in McGregor Square’s new seven-stall food hall dubbed Milepost Zero at the corner of 19th and Wazee streets.

Tora Noodles will be a spin-off of Broadway Market’s Tora Ramen with a variety of Asian dishes, and he also has plans for an unnamed ice cream and coffee stall. He will be joining chef Troy Guard, who is opening a Los Chingones stall, as well as a new sushi concept called Tiny Giant Sushi.

In October, Shaker temporarily closed Broadway Market, located in Capitol Hill at 950 N. Broadway, for the winter due to its lack of outdoor seating. He said plans to keep it closed through the summer and reopen on Labor Day in hopes that downtown office traffic picks up.

You can find out more about which cookies we are using or switch them off in settings.

This website uses cookies so that we can provide you with the best user experience possible. Cookie information is stored in your browser and performs functions such as recognising you when you return to our website and helping our team to understand which sections of the website you find most interesting and useful.

Strictly Necessary Cookie should be enabled at all times so that we can save your preferences for cookie settings.

If you disable this cookie, we will not be able to save your preferences. This means that every time you visit this website you will need to enable or disable cookies again.